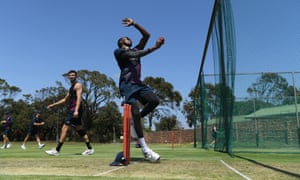 Three pacemen and one place: that is England’s dilemma here. Someone has to replace Jimmy Anderson in the team and the only way the three candidates – Jofra Archer, Mark Wood and Chris Woakes – can impress is in the nets. On Monday they all steamed in; they will do the same on Wednesday in a shorter session and then Joe Root, now fit enough to train after a stomach bug, must decide which one to play in the Test starting on Thursday.

Just before what was always going to be a rigorous net session, especially for the batsmen designated to face the three candidates, Paul Collingwood, England’s assistant coach, said: “They’ve an opportunity over the next two training sessions to prove to us they should be the one in the team.”

All three were fit to bowl; indeed Collingwood noted this rarity on tour. “It’s actually really nice to be able to come into a Test being able to choose from players who are 100% ready to go.”

Collingwood explained how the challenge is slightly different at South Africa’s oldest Test venue from that in the first two Tests. “It’s generally a slower pitch, so sometimes having that kind of X-factor can be great.” To translate, the X factor refers to the extra pace Archer and Wood can generate when everything is in alignment.

“Sunday’s training session was one of the best we’ve had for a long time,” said Collingwood. “We saw bowlers really running in against the batters. They were really making it difficult for them. If we can do that more often, then our education as a team will grow very strongly and very quickly.”

Collingwood countered the suggestion that Archer, who ended up with six wickets in the first Test, has been a little disappointing on this tour as well as expanding on the X-factor. “He’s very early on in his international career. He hasn’t bowled a lot with the Kookaburra ball, which requires a completely different skillset from the Duke’s. His main skill is bowling 90mph plus. We have enough bowlers in and around the county circuit who can bowl at 82 to 85mph and try to nip it around. You want the likes of Wood and Archer to give you that X-factor.”

The caveats abound. Archer has had a slight problem with his elbow; Wood has not played any cricket since the World Cup: Woakes is now fit but what about the X-factor? Much may depend on the evaluation of the pitch but only a fool draws any conclusions three days before the start of the game. On Monday the strip, which is darker than the rest of the square, was well-grassed with the odd bare patch. It did not look a thing of beauty and draws have become a rare event at this ground. Root stared at the surface intently while in conversation with Chris Silverwood and Graham Thorpe.

Meanwhile the rest of the squad was on the outfield playing with a football. But panic not. They were not actually playing football. They were attempting some hybrid game that is volleyball played with a football, minus a net. There was a lot of noise and plenty of argument as the senior citizens, many of whom are not especially old, took on the nippers, many of whom are really quite young.

Your correspondent naturally monitored proceedings but at the end of it all had no idea who had won. Nor, one suspects, did the spin-bowling coach, Jeetan Patel, who was umpiring the contest.

Patel has more important work to do. Not only is there debate about which paceman should play; England must also consider the spinner’s berth, and here Patel’s input will surely be important; so, too, will that of the medics. Jack Leach would have a strong case to be restored to the XI if – and it’s quite a big if – he can convince everyone he is fully fit after being laid low by illness, not only before the first Test but at the end of the last one.