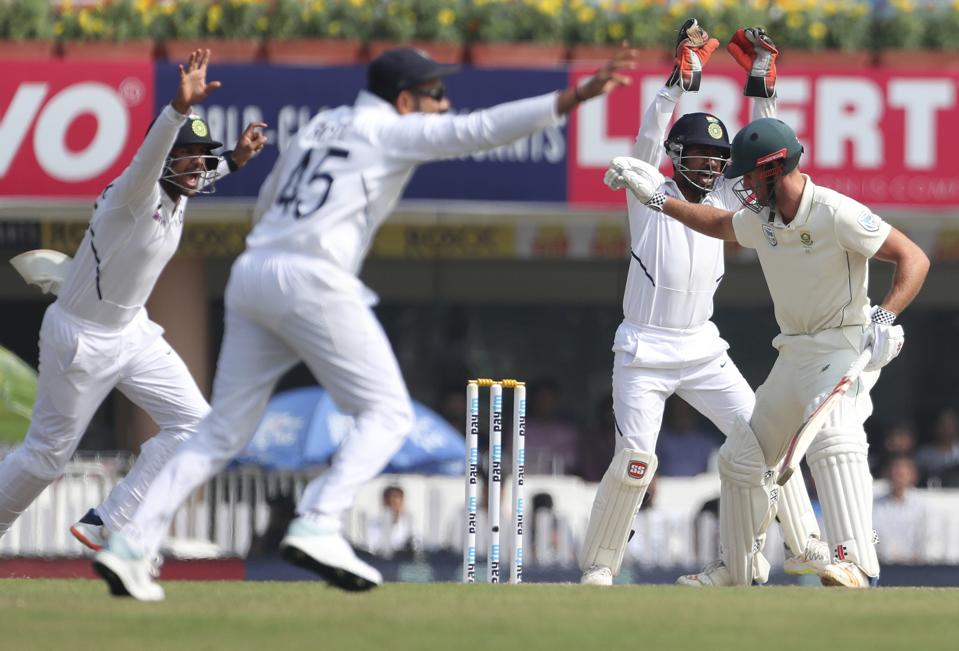 It’s hard to find new superlatives for India at home. Virat Kohli’s men just want to eviscerate every hapless opponent in front of its diehard fans. India completely thrashed South Africa 3-0 in a lopsided scoreline that only tells some of the story.

This was as big a pummeling as imaginable. South Africa – such a mentally strong and resilient team for so long – were completely broken by an impregnable India. By the dead rubber third Test in Ranchi, the Proteas had well and truly given up the fight. An innings and 202-run defeat is a complete embarrassment for a team whose hallmarks have been playing with pride and purpose.

Newborn opener Rohit Sharma continued to bully the bowlers into submission, as South Africa’s once feared attack wilted under the subcontinent sun. So much so that South Africa fractured and turned on each other with star quick Kagiso Rabada and wicketkeeper Quinton de Kock engaged in a nasty verbal exchange. Rabada angrily approached de Kock before being stopped in his tracks by exasperated skipper Faf du Plessis.

It was the last thing a jaded du Plessis needed. So battle hardened, it was jarring to see a dejected du Plessis basically wave the white flag in the field as he knew his team was headed for more humiliation. He looks tired and frustrated after such an arduous period for South Africa. The time might be right for du Plessis to call time on his captaincy but South Africa don’t have many options right now.

“Talent Is Equally Distributed, But Opportunity Is Not.”

AlamoPROMISE Serves As An Investment In The Greater San Antonio Community

It has been a painful period for South Africa on-and-off field. They mightily struggled at the World Cup – worse than usual for the chronic underachievers – and failed to make the final four.

It’s a team in transition with legends Hashim Amla and Dale Steyn retired from the Test arena. Perhaps most concerning, Cricket South Africa is in turmoil with its much maligned governing body bleeding money. It is unsurprising players, several extremely good ones, have been chasing financial security and signing contracts with county teams in the U.K. under the Kolpak rule.

A strict quota system was introduced in 2016 stating a minimum of six black cricketers must be included in every national squad.

On-field, it’s been a sad plight for a Test team arguably the most consistent in the world since its readmission in 1992. With its glory days well in the rear view, South Africa is a middling team right now although still appear dangerous in its own conditions where the ball moves around and Rabada – probably the most explosive paceman in the world on his day – gets on a roll.

South Africa is a mess but India deserve a lot of plaudits. In home conditions, this is a nasty team driven hard by an unyielding Kohli who demands perfection. In India, his team has been almost perfect and for the first time it whitewashed South Africa.

Since its last series defeat to England in 2012-13, India’s home record is a remarkable 26 wins and just one defeat in 32 Tests. The bowling attack has been exemplary. Spin bowlers Ravichandran Ashwin and Ravindra Jadeja, as I noted recently, have been something akin to legendary duo Glenn McGrath-Shane Warne – at home, anyway.

This is a golden generation of quicks for India, who had never previously been able to produce pacemen as prodigiously as neighbor Pakistan. It has impressive depth with Bhuvneshwar Kumar and veteran Ishant Sharma probably frontline bowlers in most attacks. This Indian pace attack has the menacing combination of speed and swing ensuring claiming 20 wickets should be easily attainable. In the past, Indian attacks – particularly in batting-friendly conditions abroad – were mostly toothless.

It is actually India’s batting – such a strength over the years – that has been its major stumbling block to attaining world domination. Kohli aside, India has not been able to find a trusted combination overseas.

They lost six of eight Tests in England and South Africa last year before a consolation triumph in Australia albeit the hosts were without suspended superstar duo Steve Smith and David Warner. Maybe it’s unfair, but that series deserves an asterix such is the gravitas of Smith and even Warner in home conditions.

India might have found their x-factor in Sharma, who smashed three centuries against South Africa including a double ton in Ranchi to underline his arrival as a Test opener. He’s the type of intimidator at the top of the order who can destroy teams and he adds to the swagger already percolating under Kohli’s pugnacious leadership.

Of course, there are still many question marks for Sharma over whether he can produce in foreign conditions or when India is under the pump. Still, he looms as possibly the final piece of the puzzle for India.

With five straight wins to kick off the new World Test Championship, anything other than a triumph should be a considered a failure for India. Clearly, there is much to be excited about for the world No.1 Test team.

Unfortunately, that’s not the case for sorry South Africa who are a shadow of its mighty former self.

Africa, at, Continues, Disarray, Dominate, home, in, India’s, Is, Mighty, Once, South, Team, Test, to, while